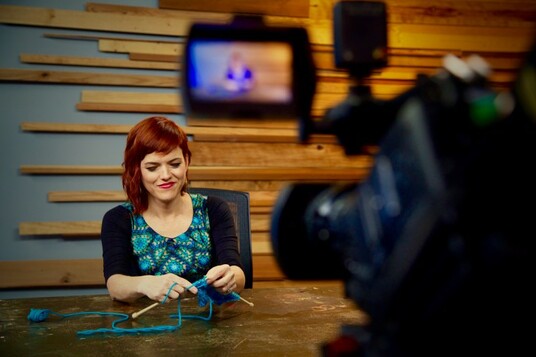 Vickie Howell (Boho Rope Baskets, Knitted Wall Hanging) is a cultivator of craft and community. She’s an award-winning broadcast personality, producer, author, designer, and instructor in the D.I.Y. world with a penchant for motivational speaking, and social media marketing.
Her 2018 People’s Telly Award Winning and Webby Award Honoree and ground-breaking series, “The Knit Show with Vickie Howell.” (YouTube) is the first studio-funded, community funded, internationally accessible knitting and crochet streaming series. With the help of over 1200 individual and company backers, Vickie successfully raised 83k in 30 days on Kickstarter towards funding the project. As of December 2017, there have been over a quarter million views by people in at least 19 accounted for countries.
Vickie is well-known as the Host of TV shows such as DIY Network’s Knitty Gritty and Stylelicious, her best selling knitting, crochet, and craft books, and her accessible, inclusive approach to nurturing the creative community via print, video and social media.
Vickie’s designs and projects have been included in hundreds of publications worldwide including her celebrity column for Knit.1 Magazine (in which she interviewed the likes of Actress Tori Spelling, Singer Lisa Loeb, Designer Isaac Mizrahi, etc), the Eco-Craft column she wrote for 3 years for Kiwi Magazine, the 2009 Lands’ End FeelGood Campaign (of which she was the spokesperson for), her blog column Craft Apparent for PBS Parents and weekly articles for iLovetoCreate.com, and regular columns in both Knit Simple and Interweave Crochet Magazines.
Over the course of her career, she’s continued to rally the crafty troops as an internationally recognized blogger & magazine columnist; a Spokesperson and Ambassador for major brands like Patons, Bernat, Caron, Land’s End, Clover Needlecrafts, and Visible Mobile; host of video campaigns for companies such as HGTV, JoAnn, Ragu, Cannon, Inkjoy, andTuesday Morning; and as the Host and Co-Executive Producer of PBS’ Knitting Daily TV with Vickie Howell.
Vickie strives to motivate and inspire people to both live creatively and make a living being creative — most recently reaching out to people via her Facebook Live series (the first and longest-running of its kind in the genre), Ask Me Monday, her online courses for CreativeLive and Brit+Co., her podcast, Craft*ish, and her subscription box business, YarnYAY!, which has sold out almost every month since it’s launch.
Follow all of Vickie’s projects on social media. You can find her @vickiehowell everywhere except Pinterest, where she’s @iamvickiehowell. 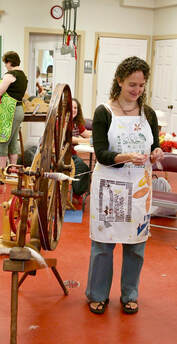 Tasha Miller Griffith (Renegade Screenprinting)
​At her core, Tasha believes that making things by hand empowers people to live more joyfully andthoughtully. She grew up in a family of self-sufficient makers and tinkerers, has been drawn to textiles of all kinds since she was very small, and is always trying to figure out what makes things work. In her classes, she builds a deep understanding of concepts through hands-on experimentation in a warm and inspiring environment. Tasha teaches nationally at folk schools and fiber arts events, and writes for Taproot and Seamwork magazines.  She shares free tutorials on her blog at https://tashamillergriffith.com/ . 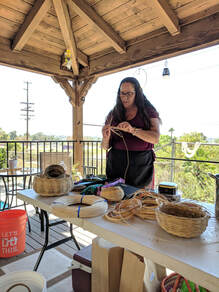 Michelle Andrus, Round Reed Basket Weaving
Basket weaving is near and dear to my heart, I have been making baskets for over 25 years.
​Over this time span I have helped many friends (and friends of
friends) learn how to weave baskets. Last year, I was approached to teach a
class and it was a huge success, this year I am holding regular classes in San
Diego. While there are hundreds of styles and techniques for basket weaving,
round reed is one of my favorites. The reed produces a simple basket that is
great for learning weaving techniques. It is also easy to work with and feels nice
in your hands. My husband and I have a small “hobby farm” in east San Diego
county. We have Alpacas and grow cotton for FUN. We have an aquaponics
system for our garden and a variety of other animals that we adore. I am a
spinner, knitter, and weaver. I enjoy working with raw materials to turn them into
something beautiful and useful. I love all things “Homegrown and Handmade”. 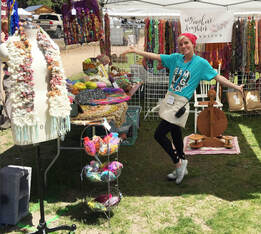 Sheramy Scott, Art Yarn Spinning
Growing up, my mom was a hand weaver.  She learned to weave in Pennsylvania when I was about four years old, so I really can’t remember a time when fiber art wasn’t a part of my life in some way.  I remember lying in bed at night listening to the sounds of her looms:  changing harnesses, beating the weft, and that wonderful cranking sound!   She also dyed her own yarn, so there was usually yarn hanging from random places to dry and an umbrella swift attached to the table.  I got my first inkle loom when I was 7 and also had a cute little table loom when I was 10.  However, it wasn’t until October 2014 that I fell down the rabbit hole (you all know the one!)  While my husband was deployed, I took my daughters for an extended stay with my parents.  I really wanted something crafty to keep my hands busy at their house, so I decided to take up knitting.  While looking for new patterns online, I discovered art yarn.  I. Was. Hooked.  Because of my mom’s influence, the divide between making yarn and using yarn didn’t seem like a very big one to me.  All I had to do was ask her.  Though she wasn’t a hand spinner, she had a bag of roving and a homemade CD drop spindle in her closet...almost like she was just waiting for me to ask!  I spent the next two months pouring over books and YouTube videos and received my first wheel as a gift for Christmas that year.  I started dyeing my own fibers in Spring of 2015 and also got my drum carder that year.  I officially opened my Etsy shop that Winter.
This craft brings me so much joy!  From dirty fleece to finished project, there isn’t a part of the process that I don’t love.  I hope that shows in this class, and each person leaves with that same joy in their new knowledge and what we create together. 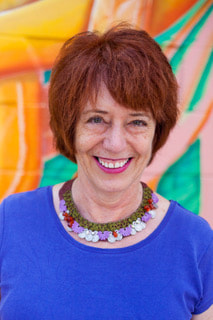 Celeste Nossiter, Knitting the Landscape
All my life the joy and mystery of color has been my motivating principle,
first in painting and now in knitwear design. I have a BA from Brandeis University
and an MFA from Pratt Institute but after being a starving artist and teaching
college part-time, I gave up that dream. Twenty years later I discovered Fair Isle
knitting. In 2003 a knitting tour of Shetland, Scotland rekindled my creative
juices and I began making my own knitted designs.  That sparked an intensive
​learning period when I experienced that color in knitting doesn’t work the same way
as color on canvas.  My greatest joy is sharing my passion with students: helping them
translate their personal inspirations into knitted designs. That includes an experiential,
hands-onapproach to learning more about color so they can get their desired results. I
teach beginning and intermediate classes in stranded knitting and a playful
approach to color theory. My heart’s desire is to bring out the inner artist that
exists in everyone through stranded knitting and color study.
I teach at yarn stores including The Yarn Store at Nob Hill and Village Wools in
Albuquerque, and Looking Glass Yarns in Santa Fe; Purl in the Pines in Flagstaff,
AZ; Vortex Yarns, Taos NM; private studios and festivals including the Taos Wool
Festival, Estes Park Wool Festival, Sneffles Fiber Festival in CO, On Higher
Ground lll Retreat in Taos and Fiber Art Fiesta in Albuquerque. I am the Fun
Events Coordinator for The Yarn Store.
Jay Begay (Sheep Hide Tanning and Vegetal Dyeing) originates from the community of Rocky Ridge in Northeastern Arizona. Jay's childhood was spent with his late Paternal Grandmother tending to the flock of sheep and goats. It was from his Grandma that he acquired these skills required to continue the pastoral ways. Today he continues to raise Navajo-Churro sheep and Angora Goats. Jay enjoys working with fiber and sharing his knowledge. Join Jay in this rare opportunity to learn the skills that were passed on from his late Paternal Grandmother.